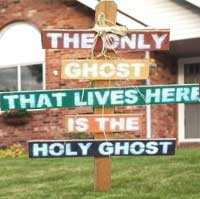 October 31st is known as “Halloween”, a Christian name meaning “Holy Evening” or “All Saints Eve”. As the early church grew, the leadership renamed religious celebrations and holy days with Christian names - replacing the old pagan gods that were long forgotten and cast aside.

People mistakenly believe that the devil, dead people`s spirits (also called demons) were set free to roam the earth to haunt and terrorize. Jesus Christ changed all that when he died on the Cross of Calvary. The dead stay dead, and their souls/spirits reside either in Paradise (Lk. 23:43) or in a temporary hell (called tartarus) until Jesus returns to raise the dead for eternal life. (1 Cor. 15:51–58).

Dead spirits are not allowed or free to come back to haunt and terrorize people (Jd. 1:6; Lk. 10:19). Before Christians emerged, non-Christians locked their doors, turned off their lights, and hid in darkness - living in fear. Today, only the foolish with a spirit of fear or those lacking in spiritual understanding, encourage others to be fearful.

When the Christians took control of this night, they renamed it “Halloween” meaning “Holy Evening”. Their lights in their homes were kept on and their doors were opened. They welcomed the poor with food, money, and/or clothing. Bibles were also handed out and the Gospel of Jesus Christ was shared with neighbours, friends and strangers (Matt. 25:31–46).

“Halloween is a our victory evening of celebration” (1 Cor. 15:57). It is a yearly reminder for believers and non-believer's alike, that Jesus Christ is not just Lord God over that night, but every day and night of the year! It is no longer a pagan festival, but a festival of praise, worship and evangelism to be witnessed, shared and celebrated with all.

Halloween is also referred to as “All Saints Eve”, which is in remembrance of all the Christians around the world who had been martyred and killed for their beliefs and relentless witness in Jesus Christ.

Some straight talk about Ghosts, Evil Spirits and Demons